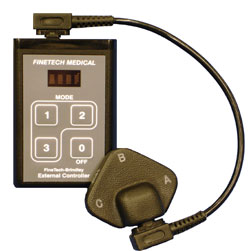 The Finetech Brindley Bladder Control System (branded as VOCARE in the US) is an active implantable medical device and is intended for restoration of bladder function after complete spinal cord injury. Secondary functions include the aiding of bowel evacuation and penile erection. Spinal cord injuries patients can benefit from this system to:-

What are the benefits?

A number of studies of the Finetech-Brindley Bladder Control System have shown a range of benefits for patients, including:3-Channel Implant Receiver

What is a Spinal Cord Injury (SCI)?

The spinal cord is the major bundle of nerves that carries signals to and from the brain to the rest of the body. A spinal cord injury or an SCI is damage inflicted to the spinal cord that results in a loss of function such as mobility or feelings.

There are two different types of Spinal Cord Injury (SCI):

Symptoms of the Spinal Cord Injury:

The ability to control limbs after a spinal cord injury mainly depends on two factors: the neurological levels of the injury and completeness of injury.

As a result of these injuries, people are frequently left with one or more of the following conditions that Finetech Medical’s products can help with:

Finetech Medical produces a range of long-term implantable neuromuscular stimulators to restore function after spinal cord injury. Functional Electrical Stimulation (FES) can be used to produce contractions in paralysed muscles. Finetech Medical’s implants deliver small electrical pulses to the nerves that supply the paralysed muscles, causing them to contract. An external, wireless device is used to control the implant and its function.

The Finetech Brindley Bladder Control System is named academically as Sacral Anterior Root Stimulator. It is a highly recommended treatment that helps spinal cord injury patients to restore bladder and bowel functions. Since the product was entered into the market in 1982, there are more than 3,000 patients worldwide are benefiting from it.

The Finetech Brindley Bladder Control System (VOCARE) is a radio-frequency powered motor control neuroprosthesis, which consists of both implanted and external components. Finetech Medical’s implant delivers low levels of electrical stimulation to a spinal cord injured patient’s intact sacral spinal nerve roots in order to elicit functional contraction of the muscles innervated by them. An external, wireless device is used to control the implant and its function.

The Finetech-Brindley consists of the following subsystems:

How does it work?

The system consists of two parts; the external digital controller which generates control signals and the internal receiver which is permanently implanted in the body to receive those signals. The implantable receiver block is relatively small and is usually located in the abdomen below the ribs under the skin. 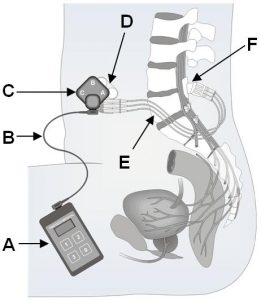 In people with average to heavy builds it is unnoticeable; however in slim people a very slight bump might be visible. The risk of the body rejecting the implant is extremely low (less than 1%). Current users of the system have found the device is still functioning perfectly more than 20 years after implantation. The Finetech Brindley Bladder System is a completely safe and highly reliable product.

Who is it for?

Candidates for the system are individuals who have a clinically complete spinal cord injury with resulting paraplegia or quadriplegia. The following list includes some of guidelines for patient selection:

The Finetech-Brindley Bladder System is CONTRAINDICATED for patients with the following characteristics:

Contact us if you fit into these criteria and are interested in finding out more about this product and receiving the treatment. We will forward your details to the most appropriate spinal centre.